Urbino is situated between the valleys of the Metauro and Foglia rivers. Its historic centre now boasts the honour of being included in the UNESCO list of World Heritage Sites. It is  birthplace of two great artists, Bramante and Raphael, and it is home to one of the oldest and most important universities in Europe, founded in 1506. For the second half of the 15th century its windy hill was the setting for one of the most illustrious courts in Europe. Duke Federico da Montefeltro gathered around him the greatest painters, poets and scholars of his day and housed them in one of Italy’s most beautiful Renaissance palaces, a palace that still stands as an eloquent memorial to this quintessential Renaissance man.
The Palazzo Ducale is a splendid late XV century residence, one of Italy’s most beautiful Renaissance palaces, defined as “a city in the form of a palace”, by humanist Baldesar. It was built by Luciano Laurana (1464-1472), who designed and carried out the main part of the building, like the Torricini façade, the Cortile D’Onore and the monumental series of steps. Francesco di Giorgio Martini, who built the most important fortresses in the Montefeltro area, finished the works started by Laurana. None of the rooms of the palace were designed to oppress with grandeur but were built on a human scale and decorated with glad-hearted sobriety. Nowadays they house the Galleria Nazionale delle Marche – a remarkable collection of paintings including one of the world’s greatest and most enigmatic images, Piero della Francesca’s Flagellation of Christ. Other great pictures here are Piero’s Madonna di Senigallia , Raphael’s La Muta, the Silent One, an anonymous portrait of a gentlewoman who we feel might talk to us if she only wished to, and a famous vision of the Ideal City by an unknown hand and much used by art designers to illustrate books on the Renaissance. The Duke’s Studiolo is the most unusual room in the palace. His tiny study is entirely decorated in exquisite trompe l’oeil inlaid woodwork

panels, some based on designs by Botticelli.
Urbino is the birthplace of Raphael, one of the most remarkable Renaissance artists. The house where he was born is now a delightful little museum. Further tourist attractions are: Oratorio S. Giovanni Battista entirely decorated in 1416 with wall-to-ceiling frescoes by the Marchegiani painters Jacopo and Lorenzo Salimbeni; Presepio or nativity scene of the Oratory of San Giuseppe by Federico Brandani; the elegant Cathedral with the nearby Albani Diocesan Museum; the Sanzio Theatre, built in the 19th century;  the rarely visited but nevertheless delightful Orto Botanico. You can’t miss: the Collegio Raffaello, founded  by Pope Clement XI in the early eighteenth century, housing the town council hall, some offices of the Prefecture and the Cabinet Museum of Physics; the Albornoz Fortress, built in the second half of the fourteenth century by Cardinal Egidio Alvares de Albornoz. As you leave Urbino you can’t miss the tombs of Duke Federico and his son, Guidobaldo, in the fine church of San Bernardino. It was built in 1491 by Francesco di Giorgio Martini and stands on the hill above the junction for the Pesaro road.
The famous local specialty is “Casciotta of Urbino”, one of the region’s handful of officially protected DOP regional food; is a delicate pale cheese made from both ewe and cow’s milk  across Pesaro and Urbino province. Crescia of Urbino is another popular specialty; it is a sort of focaccia (italian bread), filled with wiith sausage, wild herbs, ham or cheese. The most remarkable events  taking place in Urbino during the year are: Festival of Ancient Music (July), the Festival of the Duke (August) and the Kite Festival (September). 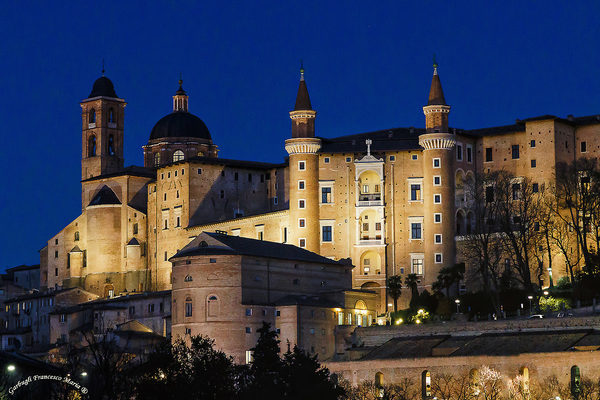 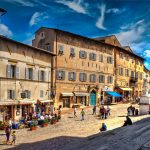 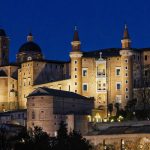